What is your horse trying to tell you? Are you missing his subtle clues?

The following case highlights the importance of owners tracking subtle signs of lameness or changes in behaviour / performance, when additionally combined with infrared physiological imaging this can greatly assist veterinary diagnosis.

Ronnie (Skewby Doo) is a 17yo Irish Sports Horse Gelding who has been owned by Fleur Finnegan for 11 years. Through the years they have competed through Pony Club and evented up to BE Novice. Ronnie has a varied workload and Fleur is a Band 6 NHS Physiotherapist, so naturally is very aware of the importance of balance, flexibility and progressive strengthening and cardiovascular fitness. 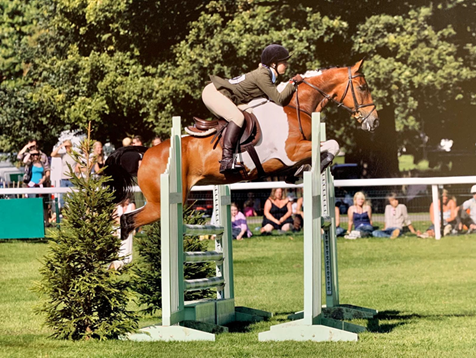 Feb 2018 – Ronnie began to display a slight hindlimb gait asymmetry and Fleur noticed an unusual hindlimb tapping when he was stood still in the stable. Ronnie had previously been diagnosed with mild arthritis to his right hock so Fleur decided to investigate further, despite the fact he was still jumping happily at home and bucking when out in the field.

Vet-IR’s Physiological imaging Service was initially used to assess his hindlimb function. The interpreting vet sent their findings to the investigating vet mentioning possible functional findings in both hocks and the pelvic region. Upon full examination Fleur’s vet found him positive to flexion on both hindlimbs, it was decided to medicated both hocks and they were able to get back out to all the activities they both enjoy.

Nov 2019 – Fleur was Arena Eventing and Ronnie presented with increased tension in right canter from his jaw to quarters, and an unusual take-off phase when jumping. Veterinary advice was sought, and again after investigation both hocks were treated with Aquamid.

Still not quite right. What are we missing?

Over the next couple of months Fleur felt that whilst Ronnie had certainly improved, there was still something that was just not quite right. Ronnie would still occasionally appear to drop one side of his pelvis, which was initially felt when Arena Eventing. Fleur knows Ronnie very well and started to notice some really subtle signs – he seemed a little more resistant in the left jaw in the contact, and his left ear seemed to be held back intermittently when schooling or hacking. Obviously his hocks had been re-treated, so Fleur wondered if there could be something else going on.

Meanwhile, as you can see from the attached photo taken days before the investigations, he was still loving his work and his jumping ability was not affected! 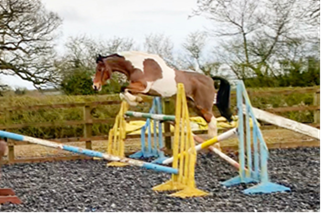 Problems in his back

Mar 20 – Physiological imaging was again performed, this time neck and spine scans were completed. The report suggested that the levels of thoracic spine and left SI joint activity were significant.

Upon investigation Fleur’s vet noted that upon palpation Ronnie was very sensitive over thoracic and sacroiliac regions. Xrays were conducted and several impinging dorsal spinal processes were found. 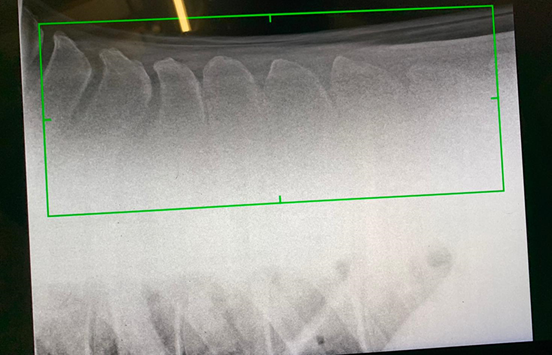 Ronnie had resection surgery in August 2020 and his sacroiliac joints were medicated. Ronnie will be monitored closely during his return to work and we wish him and Fleur all the best for his rehabilitation.

Whilst the signs Ronnie was subtly communicating may be interpreted as mild, it is important they should not be overlooked. Horses are prey and herd animals and often go to great lengths to mask any signs of pain.

Whilst the signs of underperformance could be misinterpreted for “laziness” and a pair of spurs would represent an easy fix, I am a firm believer always in the first instance you should believe your horse is trying to communicate something to you, and that avenue should be thoroughly explored before concluding the horse is “just being naughty”. I also believe the subtle signs should not be overlooked just because the horse is still pulling out on a hack or bucking in the field. In Ronnie’s case he was still jumping and not showing signs of pain 100% of the time.

Whilst I suspected his sacroiliac joints may be contributing to the described presentation, as a rider and an owner I did not suspect a bony, spinal issue. That’s why the use of this form of physiological imaging in Ronnie’s case was so beneficial. It allowed a major source of pain to be discovered that had likely been contributing for some time and would have continued to be undetected.

The use of this imaging in Ronnie’s case has allowed a targeted treatment plan to be formulated, rather than a process of elimination treatment approach that could have led to ineffective rest or therapy treatments.

I am lucky in the fact that I have owned Ronnie for 11 years so it was much easier for me to conclude that something was not quite right and investigations were required.

The team at Vet-IR would like to say a huge thank you to Fleur for taking the time to help us present and share Ronnie’s case, potentially helping other owners identify subtle changes and take action.