Will thermography become the new way to start lameness investigations?

Lameness investigations can be lengthy and costly, often exhausting their budget before reaching a conclusion. But there could be another way..

You can hear the smile on Vicky’s face as she describes Marmite, her 14.2 Irish cob. ‘Such a loveable character, a real cheeky boy but with super manners. A pleasure to own. You don’t find many with his attitude’. Despite the worry about him not being right, Marmite was her sanity during lockdown – a welcome escape. Saying goodbye to her much loved friend at just 9 years old was not a conclusion she had considered over the last year.

‘It started in June 2019. Marmite had been out jumping and the next day I noticed he was stiff on one rein and was struggling to balance in canter. There had previously been a couple of broncing episodes as well but I never thought much of it at the time, I hadn’t owned him long’ Vicky recalls.

A lameness investigation including Equinosis Lameness Locator indicated his right hind was the problem area. A low 4 point nerve block resulted in a 60% improvement. An improvement, but not enough of one. A bone scan was advised. Vicky had reservations about the bone scan. ‘My worry was a false negative and the sheer expense as well as the many negative experiences shared by friends’.

While searching facebook looking for other people’s experiences with bone scans and lameness issues, Vicky found some comments about thermal imaging, and in particular, recommendations for Vet-IR due to their clinical standard approach and veterinary interpretation and reports.

It was at this point that Vicky spoke to her local Imaging Consultant, Gemma Monk-Hartley. They discussed in detail whether thermographic imaging might be an appropriate alternative to the bone scan for Marmite, particularly as Vicky wasn’t convinced the right hind was his only issue.

Gemma explained the similarities and differences between the two diagnostic tools. ‘They both provide information on physiology as opposed to structure , they’re both used to localise an area (or areas) for further investigation and they both have the ability to detect injury and/ or disease early , before the appearance of clinical signs.

A bone scan would be selected over thermography for reviewing certain areas of the body for example larger (deeper) structures such as the pelvis.

‘Thermographic imaging has some distinct benefits which can make it a good option for the very start of an investigation; it’s considerably cheaper than a bone scan, non-invasive and can often be performed at ‘home’. Its use can help warrant additional diagnostics, including bone scans, for a number of injuries. Both imaging modalities have their place in the diagnostic toolkit and often complement one another.’

Vicky was keen to explore thermographic imaging prior to the bone scan in the hope that she could preserve as much of her budget as possible for treatment. But with a baby on the way, the only way she could fund imaging was through her insurance which would require a referral – a referral her vet didn’t feel able to support.

‘Though many vets are willing to refer suitable cases for thermographic imaging, gaining a referral can depend on numerous factors. If the vet has prior knowledge or experience with the technology, and has access to a clinical standard service, we find they are far more likely to encourage the use of the modality’ says Gemma. ‘We’re working to educate the industry about thermography to allow the technology to become more widely adopted in practice’.

Confidence in the technology 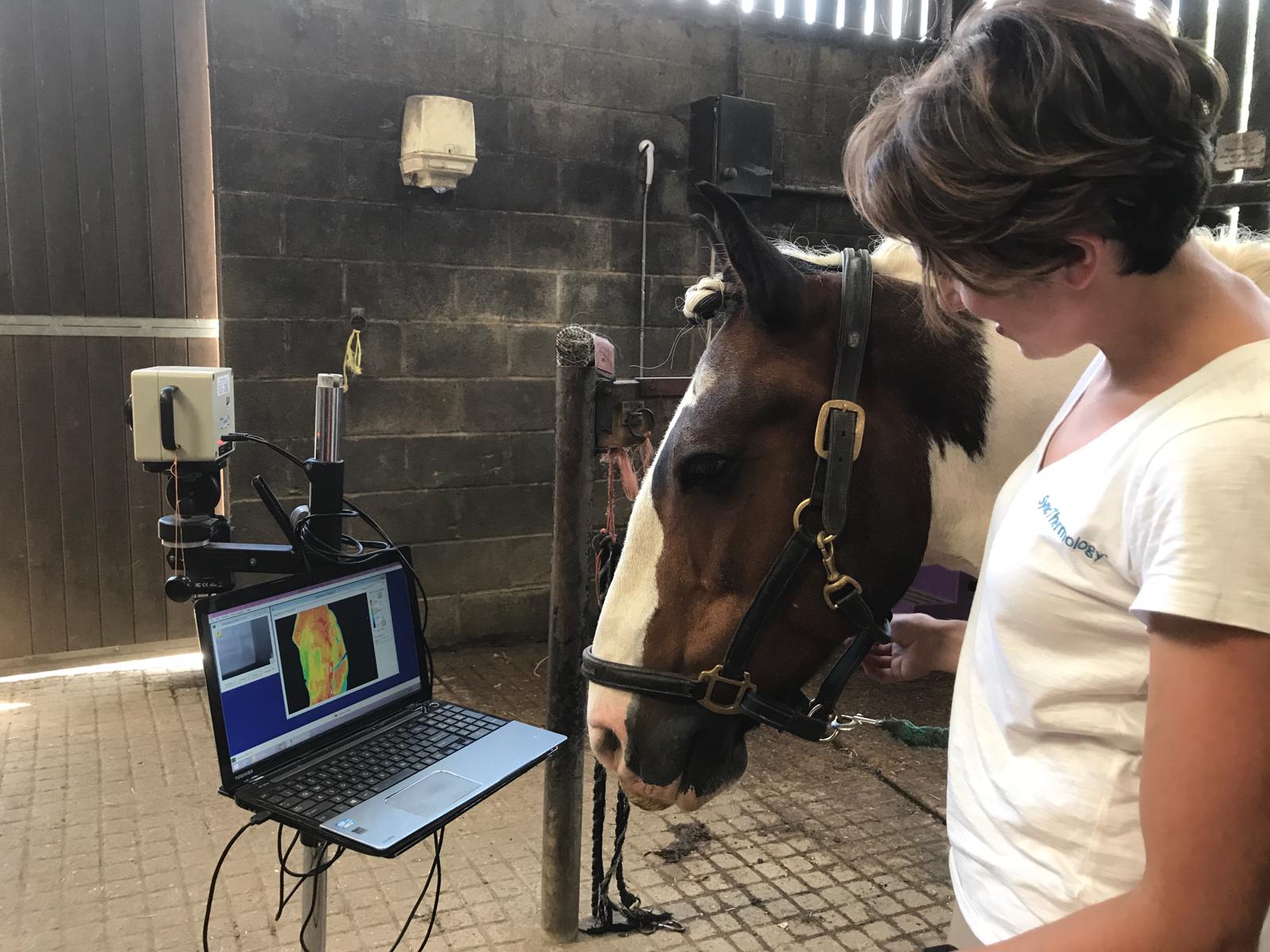 Talk to any Vet-IR imaging consultant across the country and you’ll see their passion for and confidence in the technology, imaging service and veterinary reporting they provide. Gemma is no different. Knowing that Marmite was booked in for a bone scan she saw it as a potential opportunity to correlate a case, adding data to Vet-IR’s growing research database. ‘We’re keen to correlate as many cases as we can to expand applications for the technology and improve how it’s used in practice.’

Curious to see what thermographic imaging picked up in comparison to the bone scan, Vicky gladly accepted the offer of imaging as a case study. Having had neither of the procedures carried out before she wasn’t sure what either method would reveal, but she was keen for her vet to have access to as much information as possible.

“It’s [scintigraphy] a lot of money to spend to receive no results or leads whatsoever!”

The results
The bone scan results were a disappointment to Vicky when they came back as unremarkable. ‘It’s a lot of money to spend to receive no results or leads whatsoever’. Repeat nerve blocks and an ultrasound/MRI were carried out, again coming back generally inconclusive but for a positive tendon sheath block to the right hind.

‘An unremarkable result is frequently found in any diagnostic imaging. Naturally clients can be disappointed by this but it isn’t always a negative result. It means the study or finding is either “normal” or has abnormalities that are of no significance’ explains Gemma.

The thermographic imaging report had more to say. Although unable to assess the lower hind limbs due to clip marks from the nerve blocks prior to Marmite’s scan, the full body assessment did reveal a number of findings elsewhere.

A potential primary deep foot pathology in the left hind foot. Inflammation of the tendon or ligament structures of the left metacarpus. Additional inflammation over the cervical region, the caudal thoracic spine and pelvic regions. It was noted that spinal findings could be related to muscular tightness throughout the region, spinal ligamentous sprain, or in more serious cases – vertebral facet joint dysfunction or dorsal overriding of the spinous processes (kissing spines). And patterns identified in the pelvic region may be the result of primary SI disease or pelvic imbalance, secondary to back and/or hindlimb pathology. Lastly dental images suggestive of pathology affecting the left maxillary premolars.

Vicky was relieved that report highlighted some areas to investigate further, but at the time, her vet did not feel the findings were significant enough to take forward, understandably making her question the reports validity. ‘Having now exceeded my insurance claim limit, I was keen not to waste any more of my own money on areas of insignificance so I took my vets advice to continue with an assumed tendon injury and turn him away for 9 months’.

Unexpected correlations
Fast forward to 2020, Marmite was sadly worse than ever and Vet-IR imaging report started to correlate. Over the months Marmite had been seen by a McTimoney Chiropractor, two Osteopaths and an ACPAT Physio who pointed out issues with his left fore cannon, left shoulder and left SI/ lumbar/facet joint dysfunction and gluteal. An equine dentist also picked up the left maxillary premolar during a check up in November 2019.

Marmite’s lameness worsened in March 2020 leading to him being put on box rest for a further 8 weeks. Within that time, his back became very sore to palpate and even groom. Further vet investigations were undertaken and most significantly multiple kissing spines were diagnosed via x-ray along with SI issues.

‘There is a significant body of research demonstrating that thermography is able to assist in the diagnosis of equine back pain and musculoskeletal injuries ’ Gemma comments.

Marmite’s back and SI were medicated with steroids in the hope he could be made comfortable. But the pain continued to worsen and unfortunately Marmite became increasingly uncomfortable and unhappy. The devastating decision was made to put him to sleep in May 2020.

“There seems to be a reluctance to change from the ‘norm’”

Adopting the technology
It’s tempting (and agonising) to ask; if some of those areas were investigated and treated last year, would Marmite still be here today? But that question is impossible to answer. What we do know is that in some circumstances, by the time a significant lameness is apparent there can be a number of pathologies present, each requiring diagnosis and treatment to get a good result. A comprehensive diagnostic toolbox is necessary to identify all the affected areas. Thermography should be part of that toolbox.

Vets are gradually becoming more inclusive of thermography. Jean-Marie Denoix, DVM, PhD, of the Centre d’Imagerie et de Recherche sur les Affections Locomotrices Equines (CIRALE) is one of the world’s few specialists in equine locomotion. He uses it for all his back cases at his clinic in Alfort, France.

And vets already using the technology like Donna L. Harper, DVM are experiencing the benefits for patients, clients and their own profession. ‘We live in a society where time and money are in short supply for most people. The proper use of infrared thermography in veterinary medicine can mean a substantial saving of both of these valuable resources, and more effective and humane treatment for the animal patients on which it is used….
‘The client benefits because progress is being made with manageable costs; the veterinarian benefits by being able to plan the correct diagnostics and subsequent treatment while maintaining professional credibility. All parties have benefited from the introduction of thermography by using an infrared thermal imaging camera into the process-and most of all, of course, is the benefit to the animal patient.’
As the technology develops, education and research is published and access to clinical standard imaging services is more widely available, the technology will be adopted into more and more practices.

But until then, for owners like Vicky, it can be a frustrating experience. ‘If the owner is keen to progress with investigations into areas highlighted by imaging, it would be nice to have vets supportive of this. There seems to be a reluctance to change from the ‘norm’ and sadly I wonder how many people like myself end up with horses that are PTS due to financial restrictions on further veterinary investigations. Thermography is economically more available to people and this may change the long-term prognosis for some horses.’